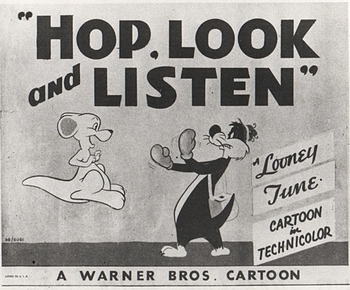 Hop, Look and Listen is a 1948 Looney Tunes short directed by Robert McKimson and starring Sylvester alongside Hippety Hopper in his first appearance.

While his mother is sleeping, Hippety Hopper sneaks away from home at the zoo and hops around town. At the same time, Sylvester is fishing for mice, but finds the mice in the hole to small for his liking and hopes for something bigger. When Hopper comes around to Sylvester's house, the cat inadvertently reels him in and mistakes him for a king-sized mouse. Feeling this is more than he bargained for, Sylvester freaks and run out of the house. Unfortunately, when the outside dog hears that a cat was scared of a mouse, Sylvester finds himself being forced to face the 'giant mouse'.