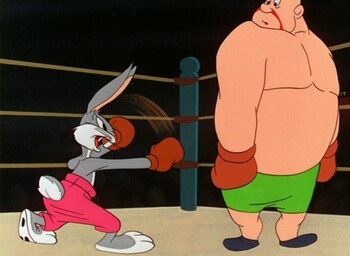 The cartoon opens in an outdoor boxing arena with a championship bout between the muscular champ "Battling McGook" (simply known as Crusher in all subsequent cartoons) and his scrawny challenger "Dyseptic McBlaster". While the majority of the audience cheers the Champ on as he beats McBlaster senseless, he finds he has one heckler, Bugs, who is watching the match nearby from his burrow. When he hears Bugs say "Why don't you pick on someone your own size?!", McGook replies "Like you?!" before throwing Bugs in the ring to take McBlaster's place. Despite being puny, Bugs is able to use his wits to give the champ a tougher challenge than he thought. As the match goes further and further into more rounds, the two opponents use more and more unorthodox tactics, culminating in a final round that looks like Bugs has finally had it...until some "technical difficulties" occur.