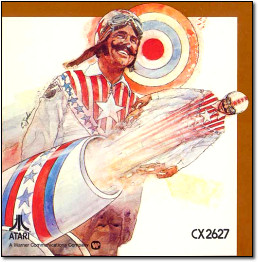 There are few men of his caliber.
Well, fire and smoke belched
Out of the cannon
And the earth trembled for a while
And the big gun roared
And Hugo soared
Through the air like a projectile
— Ray Stevens, "Hugo, The Human Cannonball"
Advertisement:

Shooting a person out of a cannon is done in Real Life as a stage act. In fiction, it's a practical way to travel long distances instantly. This is especially popular in video games.

Fiction treats being shot out of a cannon in a very literal way. Cannons used for this purpose in Real Life are powered by a large spring or compressed air, but those in fiction use gunpowder, and are often set off by lighting a fuse.note Any explosions you might see in circus acts are just for show – using gunpowder to fire a living person becomes less like a human cannonball and more like human grapeshot. Their range is even longer than that of real artillery, often on the country-wide or even interplanetary scale.

Expect the ballistic passenger to make a sudden stop by hitting a wall or a solid piece of ground (or water) at the other end. In some works, there will be no apparent effect of gravity on anyone in midflight, meaning their flight path will be a completely straight line from point A to B.

is, of course, an old circus staple that still sees some use today in many performance acts. Obviously, no explosive propellant is used, so springs or compressed air is used to eject the human, with the housing still structured to look like a cannon to keep the idea of the trope alive. The targets are usually nets, air bags or bodies of water, but as noted on The Other Wiki, it still comes with its share of risks, specifically during the landing part of the act.

May be done with a large medieval catapult in comical settings.

See Fastball Special and Human Hammer-Throw for when the person is thrown by another character, not a cannon.