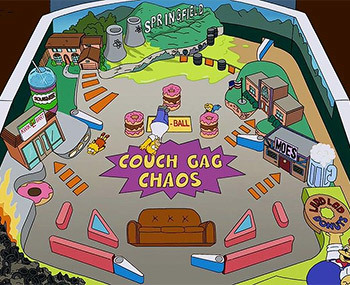 Shoot all four buildings for the Jackpot!
Advertisement:

Most frequently seen in Looney Tunes cartoons, this is a visual gag which reproduces the look and action of a Pinball game. A ball or other spherical object (sometimes a character forced to curl into a ball) careens wildly about, rebounding off of numerous objects and/or persons, producing glowing "scores" over each one. The gag ends when either it leaves the "playing field" (often by dropping into a hole), ends up hitting one thing so hard it stops them from moving or one specific target lights up with a "TILT!" indicator.

"TILT!" — the indication that an attempt to cheat at pinball by lifting or shaking the machine has been detected — is a subtrope in its own right. Tilted machines shut down immediately, ignoring player input and ending the current game, sort of an early-to-mid-20th century BSOD, with the added element of "you brought this on yourself, cheater!"note The definition changed in 1979 when the primitive processors inside were replaced with solid state computers—a tilt only ends the current ball, not the entire game. Nevertheless, the gag's meaning is unaffected. In a similar manner, a character subject to "TILT!" is usually stunned or unconscious, although whether this is because of or simply indicated by the "TILT!" varies from instance to instance.

Bonus points if Pinball-related sounds are included, such as target bells and flippers striking the moving object.

Also see Be the Ball and Bouncing Battler.