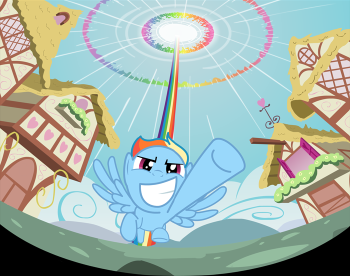 Twice the rainboom, twice the awesome!
Double Rainboom is the name of a My Little Pony: Friendship is Magic fan film written, produced, and directed by Zachary Rich, better known by his DeviantArt name, FlamingoRich

, formerly known as Flamingo1986. It is created to be his first senior film as per requirements to graduate from the Savannah College of Art and Design. Its main claim to fame is that it is the first fan-made episode that features "a full orchestral score, studio-quality sound effects, professional voice acting, and 100% show-accurate animation." He also sought out and gained Hasbro's permission.
Advertisement:

The plot goes as follows: Twilight Sparkle is developing a potion that would give a major increase to any pony's special talent. Rainbow Dash, being who she is, drinks the highly experimental potion despite Twilight's warnings. And from there on she goes and causes havoc for Ponyville and herself... and then things get weird.

The entire episode was released on March 30, 2013. It was originally scheduled for Fall 2012, but was ended up being pushed forward for quality reasons. The episode was originally posted on FlamingoRich's YouTube channel, but was taken down on February 2, 2014. Officially this was so he could "move on to other projects", including an original show called True Tail, though it's more likely his limited license with Hasbro expired and he was playing it safe. The episode has a reupload here

, with a shorter version here

On its release, the episode was promptly met with controversy and debate; while some members of the fanbase found its storyline and second half entertaining, many others were left thoroughly disappointed and deflated due specifically to those very same elements.

Warning: Due to a major plot twist midway through, there are unmarked spoilers in the tropes below.

This fan film contains examples of: