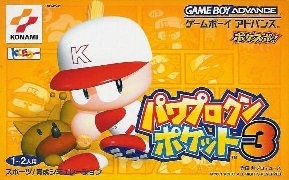 The One Where... you dismantle Mazinger Z with your bare hands.
Advertisement:

Power Pro-kun Pocket 3 is a 2001 Baseball simulator + dating sim developed by Diamond Head and published by Konami for the Game Boy Advance. The game uses a new engine for the Baseball simulator, but only comes with a single Success mode. The Minesweeper minigame from 2 does return as an unlockable, but it is just an Endless Game without story.

Custom characters made in this game are compatible with Jikkyou Pawafuru Puroyakyū Basic Edition 2001 for the Nintendo 64.

At the end of the original game, Hero 1 led a team of rookies to glory in a Baseball tournament. Then he got forced to marry a stalker over ten years his senior. And then he died in an accident. 終? Not quite.

Some years later, Kameda retrieves Hero 1's brain and ressurects him as a cyborg. This isn't out of kindness, though. Kameda has turned rotten after his own experiences of being revived as the Propeller Team's robotic minion, and sees his old friend as a slave for helping with the establishment of his own criminal Baseball organization. Can "Hero 1.3" overcome such adversities and take control of his life back?