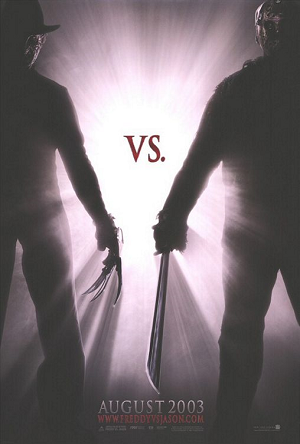 ROUND ONE... FIGHT!
"Winner Kills All."
— Tagline
Advertisement:

Freddy vs. Jason is the long-awaited crossover horror/slasher film featuring the titular titans of terror.

The film takes place after Freddy's Dead: The Final Nightmare and Jason Goes to Hell: The Final Friday.note Which hinted at the crossover for the first time with its final shot - Freddy's claw dragging Jason's mask down to Hell Freddy Krueger needs someone to help him regain his powers, since people can only dream about him if they know about him and the town of Springwood covered him up completely. After searching "the bowels of Hell", Krueger revives Jason Voorhees and sends him to Springwood; Freddy figures Jason's murderous rampage will end up blamed on Freddy (which would give Krueger back his power), and Jason doesn't seem to care if he gets blamed so long as he gets to kill.

For a brief period, the plan works: after hearing the name "Krueger" from a police officer, a group of teenagers connected to Jason's first few victims spread Freddy's name around town, which soon allows the Springwood Slasher to regain his powers. However, a cop on transfer from Crystal Lake claims that the murders are remarkably reminiscent of the Crystal Lake Killer, and says it looks like a copy-cat. But when Jason ends up killing one of Krueger's intended victims, an enraged Freddy decides to take Jason out. As the supernatural serial killers battle with each other in both dreams and reality, the teens search for a way to stop both Freddy and Jason for good.

This film marks the end of the original A Nightmare on Elm Street and Friday the 13th franchises, as a remake/continuity reboot of both series would be released a few years later. A planned film sequel to Freddy vs. Jason ended up becoming the comic book miniseries Freddy vs. Jason vs. Ash.

Freddy vs. Jason spent years in Development Hell before its eventual release in 2003. Despite mixed reviews from both critics and fans (of either franchise — or both of them), it's the most successful film in both franchises' histories: it raked in more money at the box office than any prior film in either franchise, and of the reboots that followed, only Nightmare made more (and that's only when factoring in worldwide gross).

"Place your bets!"
— Lorinote in the trailer
Feedback