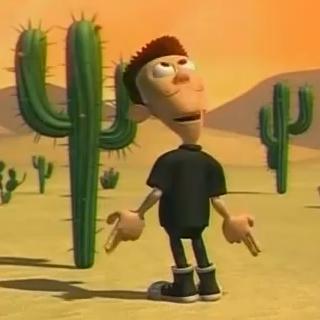 "Hey, check it out! Now I can see where I've been!"
"My ass! I can see my ass!"
— Madeline Ashton, Death Becomes Her
Advertisement:

When a freak teleportation accident, head reattachment gone wrong or some other strange occurrence ends up with a character's head on or turned the wrong way. Very likely to happen after a Cranium Chase.

Could also be the result of Amusing Injuries, especially a Neck Snap. Someone with Abnormal Limb Rotation Range might be able to do this at will without thinking twice about it.

Should not be confused with Exorcist Head, which is about the head turning around abnormally on purpose, and usually in a horrific context.