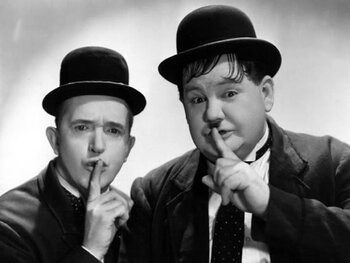 Laurel (left) and Hardy (right) in their iconic bowler hats.
"If you don’t like Laurel and Hardy, you are no friend of mine."
— Mark Hamill
Advertisement:

Laurel and Hardy got their start as a duo with director Hal Roach's studio in the late 1920s, and occasionally worked with bigger studios such as RKO and Metro-Goldwyn-Mayer. They are notable for their successful transition from silent-era film to "talkies", and were extremely prolific throughout the late '20s and the '30s. In later years, they also toured extensively as stage performers in Europe.

Though the pair's sketches were often the result of a team of writers, Stan Laurel was something of an "idea man" who rewrote segments of scripts and did a lot of improvising.

They are fondly remembered in popular culture today, thanks to constant television showings, inspiring many other comedy duos and the techniques they pioneered in their films.

A 1999 film titled For Love and Mummy features the duo involved in a plot by an insane Egyptian to rule the world by allowing a snake demon to marry an archaeologist's daughter.

A 2018 film titled Stan & Ollie chronicles their tours in Europe after their movie career in Hollywood ended. Steve Coogan and John C. Reilly portrayed the duo in it.

Here's some other nice tropes you've gotten us into!

"Well, here's another nice TV Tropes page you've gotten me into!"
[Whimpers] "Well, I couldn't help it, you always blame me!"