Agony of the Feet 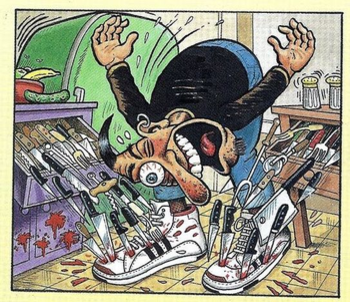 Magnetic insoles = BAD idea.
Friend: I hope you burn in hell!
Me: I hope you step on a LEGO in the dark.
Friend: [gasps] Take that back!
— Quote from Twitter

Eyes, teeth, tongues, genitalia and fingers are all extremely sensitive and fragile body parts... and so are our feet and toes. Just like our other appendages and digits, both the feet and their toes are full of nerve endings and blood vessels, and as such are highly vulnerable to painful things happening to them.

This trope occurs if something painful happens to your characters' toe, toes, foot or feet, and the situation is used as a dramatic device or a plot point. It's usually Played for Drama and/or for horror or dark comedy. Audience will instantly sympathize with any characters that fall victim to this trope.

Can come about in two ways:

Makes you wince, doesn't it?

Most people in real life can relate to foot and toe injuries since they tend to be very common in everyday life. This makes toenail, toe, or foot severing very hard to watch or read about because it effectively makes viewers feel the character's pain. Also — loss of toes is nastier than people might generally assume, as losing even minor toes can cause serious damage to our ability to balance and walk.

Sometimes the toes or feet can be comedically throbbing. High Heel Hurt is a common sub-trope. Compare An Arm and a Leg, where an entire limb is lost; and Impaled Palm, where the hand palm is pierced by some object. May overlap with Twisted Ankle (any injury which causes a fleeing victim to become slowed, giving his pursuer a better chance to catch up). See also Cold-Blooded Torture, Mutilation Interrogation and A Taste of the Lash. May result in a Hurt Foot Hop.

This happens far too often in Real Life, so No Real Life Examples, Please!

(The trope name is a play on the famous slogan of Wide World of Sports: "The thrill of victory, and the agony of defeat.''

Jack amusingly hurts his feet on various objects due to not having his sandals.

Jack amusingly hurts his feet on various objects due to not having his sandals.