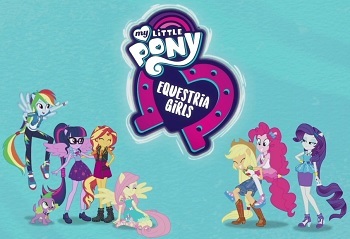 A YouTube original web series based on the My Little Pony: Equestria Girls franchise, the series centers around the Mane Seven (Sunset Shimmer, Twilight Sparkle, Rainbow Dash, Fluttershy, Pinkie Pie, Rarity, and Applejack) and their magical adventures while dealing with their daily school lives.

It premiered on November 17th 2017 with the episode "A Fine Line", and the initial press release mentions that it'll run for at least 45 episodes. However, several sets have premiered early on the Discovery Family GO! app and Discovery GO! website: on November 2 (1-4), November 5 (5-7), and November 8 (8-11). A second season was announced on January 10, 2019. Following the announcement that the My Little Pony franchise was to be rebooted, the second season will be the show's last.

Watch the series every Friday on Hasbro's YouTube channel here

The trailer used in Comicbook.com's initial announcement of the series

can be seen here

; the second trailer released shortly after the first episode can be seen here

The Case of the Bedazzled Boot

The Case of the Bedazzled Boot