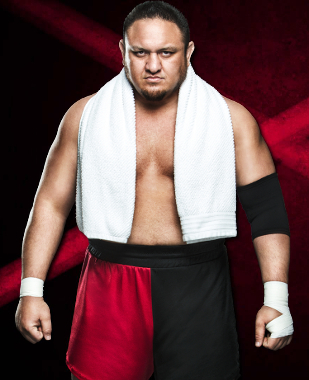 Joe is gonna kill you!
"So, boy, why'd you do it? They never thought he could... but deep inside he always knew he would. That's right, take over! Deal the cards, that's what he does now, yeah... and if you don't come along, it's gonna be a beat down."
Advertisement:

Samoa Joe (real name Nuufolau Joel Seanoa; born March 17, 1979) is an American troupe dancer and mortgage broker-turned-professional wrestler as of 1999. He is the first graduate of the UIWA West Coast Dojo and further boosted his star in Californian Ultimate Pro Wrestling. He is notable for subverting the Wild Samoan stereotype by being a submission expert and for being one of the few well-known wrestlers of Polynesian ancestry (he was born in the United States) not to have any ties to the Anoa'i Wrestling Family.

Seanoa established himself with his high profile and critically acclaimed matches in Ring of Honor from the promotion's beginning in 2002, holding the ROH World Championship once for a record 21 months from May 2003 to December 2004, and the ROH Pure Championship once. Upon joining TNA, debuting at Slammiversary in June 2005, he embarked upon an 18-month-long undefeated streak, in which he never lost a match by pinfall or submission, and afterwards remained one of its top-tier wrestlers, winning the TNA World Heavyweight Championship once, the TNA X Division Championship five times, the TNA World Tag Team Championship twice (once by himself and the other with Magnus), and the TNA Television Championship once. He was voted the 2005 Most Outstanding Wrestler by readers of The Wrestling Observer Newsletter, making him the first from both TNA and ROH to win this accolade. He left TNA in February 2015, briefly competing again in ROH and the independent circuit. He officially debuted in WWE's developmental territory NXT in May that year, winning the NXT Championship almost a year later, and was called to the main roster in late 2016. He performed on Raw until the 2018 Superstar Shakeup, where he was drafted to Smackdown instead, beginning feuds with AJ Styles, Jeff Hardy and Rey Mysterio Jr.. In 2019 he won his first WWE title in the main roster, the United States Championship.

He was ultimately released from WWE in January 2022. On April 1, Joe appeared on ROH Supercard of Honor, with the immediate revelation afterwards that he'd signed to All Elite Wrestling.

"A trope list for the champion? You already know!"

As it turned out, Seth was actually telling the truth. This, of course, made AoP into sitting ducks when they were cornered by the Viking Raiders, as Joe and Owens had goaded Rollins into pointing their location out to Erik and Ivar.

"Now he's done it! I'll make you see a world. That's right a world you can't paint back! That's right, that's a that's a fact!"
Feedback