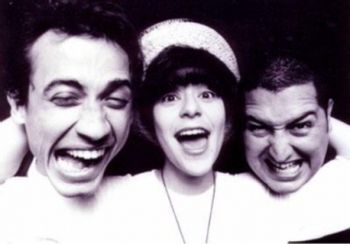 From left to right: John, Fernanda and Ricardo.
"Pato Fu has a career that gives us an alibi for doing whatever we want. If we wanted to make a disc of country music it wouldn't be so scary. We have songs that go through that, then it wouldn't be so absurd. But we will not do that."
—John Ulhoa
"It's better to be the largest independent band from Brazil instead of be the smallest mainstream band."
—Fernanda Takai
Advertisement:

When a student of Public Relations joins two friends who owned a guitar shop to play Alternative Rock, the result is, according to Time magazine, one of the ten best bands on the planet

Founded in Belo Horizonte, Brazil, 1992 and named after a Garfield comic strip, in which he practices a martial art called " Duck! Cat Fu", Pato Fu has a sound that goes from the heavier rock to ballads, sung in the gentle voice of lead singer Fernanda Takai. Usually with witty lyrics, full of pop references, written by the guitarist John Ulhoa or the bass player Ricardo Koctus, the only sure thing about the band's style is that... well ... it's awesome.

Other artists joined the group over the years, as the percussionist Xande Tamietti and the keyboardist Lulu Camargo, who remain in the band today, and Dudu Tsuda, who left in 2009.

The albums released by Pato Fu so far are:

Pato Fu has examples of: