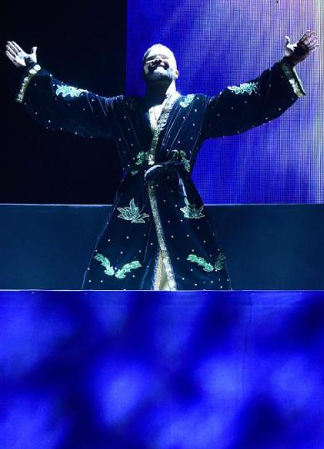 He made his debut in 2004 as a member of Team Canada, a group of heels under the tutelage of Scott D'amore. With fellow stablemate and Canadian Eric Young he went on to capture the NWA World Tag Titles

twice and went by the nickname of "The Canadian Enforcer" as he was The Dragon of the group.

When Team Canada was disbanded he declared himself the hottest free agent in wrestling, being interviewed by many prospective managers (including Bobby "The Brain" Heenan and "Sensational" Sherri Martel), in the end taking on Traci Brooks as his manager. He also inherited a company from his late grandfather and became rich (though it was never said what the company exactly was). He then bought out former friend Eric Young's contract and basically treated him like dirt, ignoring they were former two time NWA World Tag Team Champions for a long time. After Young won his freedom, however, he turned his mistreatment on Ms. Brooks until they finally had it with each other and he "fired" her.

Come 2008, after another run with a buxom assistant (Payton Banks) that didn't last long, Roode was paired with "Cowboy" James Storm. The two went on to become Beer Money Incorporated, arguably TNA's most successful and greatest tag team. Beer Money captured the TNA tag titles four times, the last being the longest tag title reign in company history as well. From 2008 to 2011 they feuded with many teams such as Team 3D, LAX, The Motor City Machine Guns, and others, and they produced several great matches. However, near the end, they both had their eyes on a bigger prize—especially Roode.

In October of 2011, Roode was facing Storm in a match for the TNA World Heavyweight Title

(Storm having won it two weeks ago against Kurt Angle, who Roode had come up short against) and during it he got knocked outside and near Storm's beer bottle. After a moment of hesitation he grabbed it and slammed it into Storm's head, knocking him out and winning the title whilst ending Beer Money. Roode underwent a Face–Heel Turn as he turned his back on his best friend and become concerned with only one person: himself.

Bobby Roode's title reign would go on to be the longest TNA world title reign in company history at 256 days. During that time period many people praised his promo skills and match skills, as his every move successfully turned his character into the biggest jerk in the business, with even The Rock himself approving of him.

Roode has since lost the world title, gone through various feuds and title chases, gradually come to regret and even repent from his Jerkass ways after being on the receiving end of mistreatment from Dixie Carter and MVP, and finally (albeit briefly) retaken the World Heavyweight Championship after defeating Bobby Lashley in late 2014.

In 2016, he signed with WWE and competes on NXT. In January 2017, Roode became a NXT Champion after beating Shinsuke Nakamura at Takeover: San Antonio. This resulted in the start of what he called the "Glorious Era" of NXT, as well as a feud with Nakamura which ended when Roode beat him again at Takeover: Orlando. Roode eventually dropped the belt to Drew McIntyre in August 2017 at Takeover: Brooklyn III. He made his main roster debut on Smackdown Live the following week.