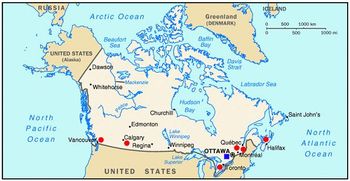 Canada is a Northern American country and the second largest country in the world by area. Compared to other countries its population (37 million people) is rather modest at best, boasting a population density of only 3.7 people per square kilometre (the UK squeezes 255 people into the same space). The provinces and territories maintain a friendly rivalry, usually resorting to snide jokes and CFL playoffs. Why is it like this? Mainly because of the confusing origins and exacerbated regional differences. That said, Canada is still a unified country, and the rivalry that goes on is similar to that of any country.

Three of the most memorable moments to most Canadians in their history include: the War of 1812 in which a fledgling colony was defended from the invading southern forces; the 1917 Battle of Vimy Ridge in which the outstanding logsitician and professional engineer General Arthur William Currie (equal only to the Australian General and Civil Engineer John Monash) captured a godforsaken ridge from the Germans and successfully held it against counter-attack; and finally, Game 8, 1972, Canada v. Soviet Unionnote Henderson SCORES!!!.

Insisting that Canada is still a Dominion of the United Kingdom or is in any way in some sort of union with the United States is bound to stir up some backdraft amongst Canadians, as will suggesting Quebec should be independent (outside of Quebec, minus certain parts of Montreal).

Culturally, Canadians are perceived as being modest, quiet, and a bit like a backwards rustic neighbour of the US (kind of like Minnesota writ large). Similarities to America are profound, but those similarities are heatedly protested by Canadians. If one is asked to think of "Canada", generally the idea of plaid-wearing lumberjacks in a snow-filled pine forest where moose and beavers frolic about and bears savagely roam is imagined. Somewhere, ice hockey is filled in. Maple syrup (as well as the maple leaf, which is on Canada's flag) is commonly associated with Canada, and it's hard to imagine it not covered in snow and freezing.

Tropes associated with Canada include:

Indexes associated with Canada include: 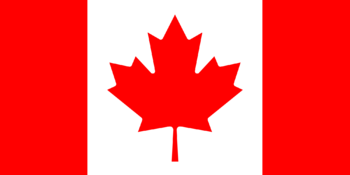 Red and white are heraldic colours assigned to the country by King George V in 1921, although it goes way back. The maple leaf in the center has been a national symbol for many centuries, ever since the French first occupied the area. This flag was adopted in 1965 by then Prime Minister Lester B. Pearson; before that Canada used the British Union Jack officially, and the Canadian Red Ensign (a British Red Ensign defaced by the Coat of Arms of Canada) informally.
Arms of Canada 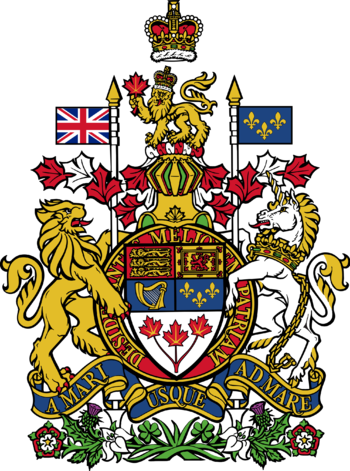 The arms of Canada is based on the British coat of arms with French and Canadian elements. It includes the (crown represents the Canadian monarchy), the lion holding a maple leaf (representing the Governor-General) while standing on a red and white silk (which are Canada's national colours), a helmet with mantlings red and white maple leaves (representing the Canadian flag), the shield that is similar to the British shield except with three fleurs-de-lis (as a reference to Canada being colonized by France) and a sprig of red maple leaves (representing Canada), a ribbon with the motto "desiderantes meliorem patriam" (meaning "desiring a better country"; which is the same motto of the Order of Canada) from Hebrews 11:16, the national motto "a mari usque ad mare" (meaning "From sea to sea") from Hebrews 11:16 as a reference to Canada having the longest coastline in the world, the supporters are the lion (representing England) and the unicorn (representing Scotland) holding the British and the French flags (as a reference to Canada's official languages) respectively (unlike the British coat of arms, the lion is not crowned nor facing the viewer and the unicorn's chain is broken) and on the bottom are plants from the nations that influenced Canada through history, the red and white roses (symbolizing England and Ireland), the thistle (representing Scotland), the shamrock (representing Ireland) and the fleur-de-lis (representing France).
The Canadian national anthem
O Canada!
Our home and native land!
True patriot love in all of us command.
With glowing hearts we see thee rise,
The True North strong and free!
From far and wide,
O Canada, we stand on guard for thee.
God keep our land glorious and free!
O Canada, we stand on guard for thee.
O Canada, we stand on guard for thee.