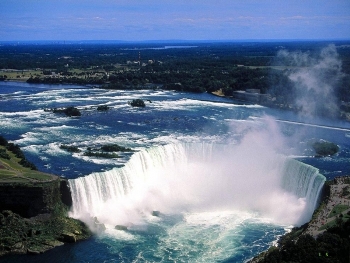 Niagara Falls is a large and spectacular series of waterfalls located along the border of America's New York State and the Canadian province of Ontario. If you want all the fiddly technical details, go check out the relevant article

on The Other Wiki. In popular culture, the falls are best known for three things:

If the falls appear in any sort of comedy or adventure context, someone's going over them, with or without a barrel.

And if you're wondering about going there as a tourist destination, please make sure you're on the Canadian side of the border. The American side is a Thriving Ghost Town, due to Canada having a much better view of the falls and high-rise casinos. Don't wait too long to go, either, as Niagara Falls will disappear about fifty thousand years from now when the river erodes the land all the way back to Lake Erie.