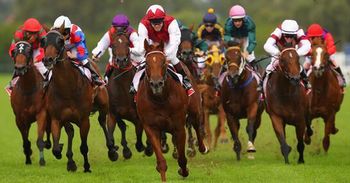 In which men (mostly) wear multi-coloured outfits and see how fast they can ride equines (very fast, it turns out). Historically, the three Grade I stakes races which make up the Triple Crown of American Thoroughbred Racing (the Kentucky Derby, the Preakness Stakes, and the Belmont Stakes) are the totality of public knowledge about the sport in the US. In the UK, the most prestigious races are the ones that make up the Triple Crown of British Thoroughbred Racing (the 2,000 Guineas, The Derby note sometimes referred to as the Epsom Derby, especially in the United States to avoid confusion with the Kentucky Derby, although it is officially known as The Derby Stakes and is named for the 12th Earl of Derby who sponsored the first race in 1780; every other horse race with the word "Derby" in the title is named for this one, and the St. Leger), in addition to which there's the Royal Ascot meet and — venturing over into steeplechasing (the one with jumps, also known as National Hunt racing) — the Cheltenham Festival and the Grand National.

A frequent complaint against American Thoroughbred racing is that accomplished horses are generally retired from racing early (usually after their third year) to breed with other horses that raced well, in hopes of creating even better racehorses. The reasons are complex but generally involve a bit of financial calculus, comparing the all-but-guaranteed profits to be had on a horse (especially a stallion) in the breeding shed versus the honor and glory to be gained (at risk) on the racetrack. The most famous US-based horses of recent days to continue racing into their fourth years are California Chrome (who was retired in January 2017 as a 6-year-old) and Arrogate (retired at the end of his four-year-old season). California Chrome's bankroll of over $14 million was the greatest ever earned by a North America-based horse before Arrogate rode 2017 wins in the world's two richest races to a new North American record of $17.4 million. Before this pair, the most notable US-based horses in recent years to race beyond three were two-time Horse of the Year Wise Dan (justified in his case, being a gelding), Zenyatta (filly/mare formerly tied for the longest streak of consecutive Grade I/Group 1 wins worldwide), and Curlin (whose money record "Chrome" broke).

Another critique is that American Thoroughbreds are excessively inbred. Several breeding lines are especially popular, particularly that of Northern Dancer, a Canadian champion who is the grandsire of the great Storm Cat, and Seattle Slew (the first horse to win the U.S. Triple Crown while undefeated), through his son A.P. Indy.

PETA hates this sport, claiming that the horses in question are too young to be competitively racing.

Thoroughbred racing is also popular in Australia, Great Britain (mainly England), Ireland, France, Japan and (increasingly) in Latin America and Dubai. English racing differs from American racing in several ways: the races are more likely to be on turf (grass); they tend to be longer, horses generally have longer racing careers, and fillies/mares are more often matched against males than they are in the U.S. Another big difference is in course layouts. All tracks in the US (and Canada) run counterclockwise (or left-handed), with all turns being to the left. On the other hand, Britain has both left-handed and right-handed tracks.note For some examples, Ascot (Royal Ascot meet and British Champions Day) is right-handed; Epsom Downs (the Derby and the Oaks) and Doncaster (St Leger) are left-handed; Newmarket is right-handed, but its most famous races, the 1000 and 2000 Guineas, are run on a very long straight. In Australia, the "handedness" of a track depends on the state. Queensland and New South Wales race clockwise (right-handed), while all other states race counterclockwise. And then there's Japan, which is a complete mess regarding track handedness (there are 24 tracks across the country, 7 of which* Tokyo, Niigata (which also holds some races on one big straight), Chukyo, Morioka, Funabashi, Urawa and Kawasaki are left-handed; the rest, barring Ohi, are right-handed).note It doesn't help that 1. one Japanese racecourse, namely Ohi racecourse (originally right-handed), has started holding races in both directions starting from 2021 and 2. another one, the Nakayama Racecourse (an otherwise right-handed racecourse too), has a dedicated steeplechase course that has multiple turns in both directions.

Other types of horse racing include the steeplechase (racing on a turf course with regularly-spaced jumps), Quarter Horse racing (very short sprints for horses who maintain their best speed at distances of a quarter of a mile), harness racing (Standardbred or French Trotter horses trotting or pacing while attached to sulkies: light vehicles in which the driver rides, and arguably the modern form of the ancient sport of chariot racing), and ban'ei (Japanese draft horses racing while pulling large weights). In the UK and Ireland, the term "steeplechase" refers exclusively to races run over large fixed obstacles; races that call for jumping over lower obstacles are called "hurdle" races, and both types are collectively called "jump" or "National Hunt" racing (although properly speaking, "National Hunt" also includes some flat races used to help prepare horses to eventually contest jump races).

In the UK, horse racing is sometimes known as the "Sport of Kings" due to the Royal Family's long-term interest in the sport; Charles II was an avid patron, and his niece Queen Anne founded Ascot racecourse near Windsor. This continues to this day — for HM The Queen, horses have been a lifelong passion and she is particularly keen on breeding Thoroughbreds for racing. Racehorses owned by her have won over 1,600 races, including every high-profile British flat race bar The Derby note  she has been the British flat racing Champion Owner — the owner whose horses have won the most prize money during a single season — twice; her father (George VI) and her great-grandfather (Edward VII) both won this once each. Apparently she does not gamble, although she is said to read the Racing Post over breakfast every morning.

A fact about National Hunt racing (at least in the UK and Ireland) little-known to the uninitiated is that it's open to breeds other than Thoroughbreds. While most competitors are Thoroughbreds, it's not unknown to see a Selle Français (a French breed best known for its show jumping prowess) or an AQPS (a French breed of mostly Thoroughbred lineage, with extensive crosses to SF and a couple other sport horse breeds).

General Notes on Types of Races

You can learn a lot about Japanese horse racing while watching Uma Musume, however not all horses have made the cut there for a variety of reasons (mostly owners being opposed to the idea). While many on this list are not in the series (yet?), they're still worth your attention.