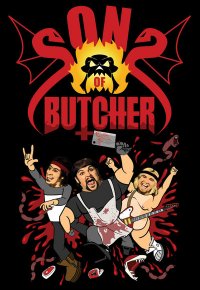 Sons of Butcher (2005-2006) was a Canadian animated TV show based on the Canadian rock band of the same name and starring its three members, Sol Butcher, Ricky Butcher and Doug Borski. By day they run a butcher shop, but by night they form a rock band. At first glance this seems like a normal, everyday group right?

Pretty much every episode contains the three having to deal with/create twisted, weird and outright WTF moments. It's best to leave all sense of reality at the door when you watch this show.

The animation was done entirely in Adobe Flash, except the three main characters, who had their actors' heads recorded live and superimposed in the show.

The series aired on Teletoon's Detour block for 2 seasons and 26 episodes.

The show extended into real life as the trio released three CDs and had a tour across Canada.

Episodes can be viewed on the creators' YouTube channel, Massive Xplosion