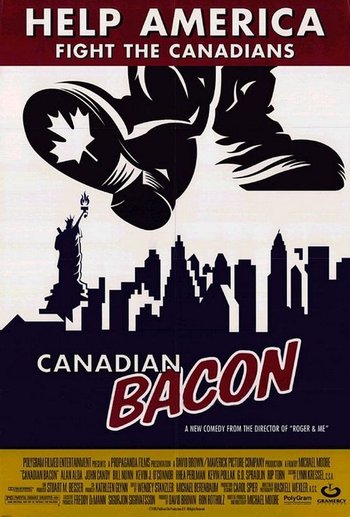 "Canadians. They walk among us."
Advertisement:

In the wake of the unexpected end of the Cold War, the sitting President of the United States, a milquetoast bumbler played by Alan Alda, is faced with a shrinking economy and high unemployment at home. Believing, rightly or not, that restarting the Cold War and the associated military-industrial complex at full steam will be just the right kind of economic stimulus, the President's advisors, in cahoots with a shady weapons contractor, try to get the Russians to play ball. When they say no, they decide to invent a fictitious conflict with their neighbor to the north, Canada.

Meanwhile, Sheriff Bud Boomer (Candy) of Niagara Falls, New York, has to deal with the unpleasant realities of the loss of his town's primary employer; he, his deputy, and all his friends lost their factory jobs when the Cold War ended. When the government spin doctors put out the news of the Canadian menace, he buys it completely, and sets about fortifying his town as a border defense against the coming invasion.

The film is notable as John Candy's last starring role and Michael Moore's only non-documentary feature. Plus a magnificent throwaway line, especially considering the director, about the absurdity of a situation as comparable to declaring war on terrorism. Which they wanted to do to increase the approval rating of the president. In 1995!