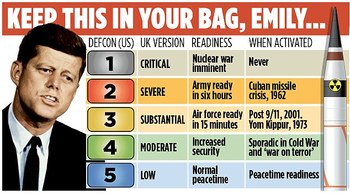 In some movies, the phrase "Defcon 5" or Defense Readiness Condition 5 is used to refer to the highest state of alert for the United States Armed Forces.

This is incorrect, and this trope is about the misuse of these terms. DEFCON 5 (codename "FADE OUT"note These codenames are used during exercises to avoid confusion with the real deal) is the lowest state of alert, aka completely tranquil peace time. DEFCON 1 (codename "COCKED PISTOL") is the highest, referring to a confirmed state of nuclear war. The use of nuclear weapons is authorized here, but they will still require unlock codes from high authority. The highest state reached for the Strategic Air Command in US history was DEFCON 2 (codename "FAST PACE", during the Cuban Missile Crisis), the Gulf War also led to forces in the Middle East reaching DEFCON 2, for obvious reasons — i.e., actually being at war. The Yom Kippur War of 1973 saw a brief period at DEFCON 3 (codename "ROUND HOUSE", with some forces in the Middle East being at 2), as did 9/11. It's important to note that DEFCON levels can be limited to geographical regions, DEFCON 2 during the Cuban Missile Crisis and the Gulf War were limited to the affected regions. The highest that the worldwide DEFCON level has ever risen to is 3.

The UK did once operate a "Queen's Order" level which escalated from 1 to 5, QO1 being the peacetime default and QO5 meaning (at the time) that the V-bombers

had started their [probably] one way trip to enemy territory. The current system, dubbed the UK Threat Levels, doesn't use numbers at all, instead ranking the current likelihood of attack on a scale from Low to Critical (its most recent predecessor, the now-defunct BIKINI scale, used colours). However, these levels do not correspond to US Defcon levels - for example, the UK reached a "critical" Threat Level in 2006 and 2007. Thus, there is currently no real UK equivalent. Other countries have their own status levels, in some cases where this trope is played straight, in others they use phrases or colours instead.

It should be pointed out that alert levels mean different things to different forces. An armoured division in the US is going to take several weeks at best to move and engage an enemy (unless the Russians are hitting Long Island right now), even at DEFCON 1. On the other hand, nuclear missile forces - designed to launch at a moment's notice - are essentially at DEFCON 1 at all times, even if the current status is DEFCON 5.

Other nations have similar alert systems.

Compare with The War on Terror, for the color system that is often parodied for its vagueness.