Attack of the Political Ad 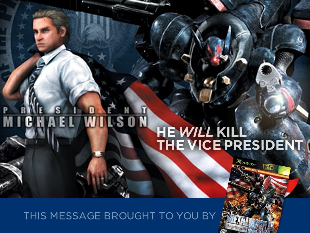 Those attack ads get nastier every year.
"The ads they run are not generic party ads or issue ads — they are 'Bill Clinton-is-the-best-thing-since-twist-off-caps' ads and 'Bob-Dole-is-the-cause-of-halitosis-and-genital-warts' ads... (I personally doubt the genital wart claim, but...)"
— Jim Hightower, If God Had Meant Us to Vote They Would Have Given Us Candidates
Advertisement:

Very much a fact of life in any democratic process. Since the advent of television, political campaigns have taken to the airwaves every election cycle just to point out the flaws and negative characteristics of their opponents in the most unsavory ways. They contrast the most unattractive pictures they can find of their opponent with the most appealing photos of their own candidate, they Quote Mine, they scare you into thinking that if their opponent is elected they'll, literally, send your world straight to Hell and personally hand it over to Satan himself.

As such, whenever a work of fiction with political themes focuses on public campaigning, attack ads tend to show up in the most exaggerated forms, occasionally even parodying Real Life attack ads. Oftentimes, a political opponent is smeared to an extraordinary degree not just to be portrayed as the wrong person for political office but also as being downright evil. For example, the opposition candidate can be suggested to have been involved in causing any number of world disasters, accused of eating babies, or outright claimed to want to be the next Hitler. This will likely be contrasted with the endorsed candidate being portrayed in an unbelievably saintly light. Naturally, this is usually Played for Laughs.

Subtrope of Propaganda Piece and Competing Product Potshot (in a broad sense of the word "product"). Demonization is a more general case, less restrained by the necessity to keep at least formal decency. Compare Scare Campaign.