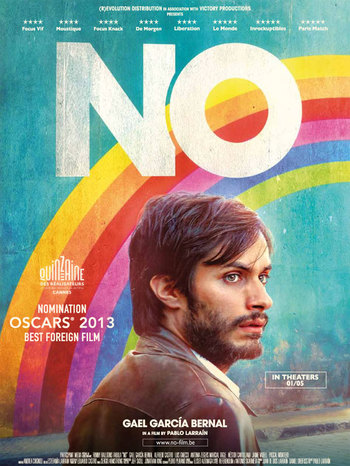 No is a 2012 film directed by Pablo Larraín, based on the unpublished play El Plebiscito, written by Antonio Skármeta.

Chile, 1988. Augusto Pinochet has been dictator for fifteen years, since the 1973 coup (backed by the United States) that outsted left-wing but democratically elected President Salvador Allende. The brutality of Pinochet's regime—political prisoners, dissidents kidnapped by the regime and never seen again, torture—has brought international pressure on Pinochet to reform. Faced with this pressure, Pinochet elects to hold a plebescite on whether or not he should continue as president of the country. A "Yes" vote will give his regime a veneer of legitimacy that it has previously lacked.

Enter Rene (Gael García Bernal), an advertising man who makes TV commercials for stuff like Pepsi Free diet soda and microwave ovens. Rene is hired by the opposition to make commercials urging Chileans to vote "No". Rene is conflicted about it but eventually accepts the job, despite the danger it could pose to his cushy lifestyle. The leaders of the opposition, for their part, are none too thrilled when Rene reveals his strategy of advertising the "No" campaign just like he advertises diet soda and kitchen appliances, as an attractive product. And looming over everything is the threat that Pinochet will crack down brutally on the opposition, as he has so many times before.