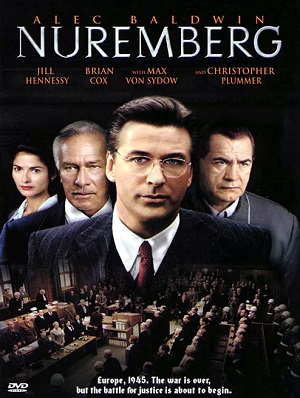 Nuremberg is a 2000 miniseries based on the main IMT 'Nuremberg' Trials of 200 Nazi leaders for War Crimes and Crimes Against Humanity conducted during World War II. It consisted of two episodes and starred Alec Baldwin, Brian Cox, Michael Ironside, Jill Hennessy, Christopher Plummer, Colm Feore and many, many others.

Some tout it as an almost propagandistic re-iteration of the contemporary US government's portrayal of the trial process. Others note that it is flawed, especially in its sympathetic portrayal of such figures as Albert Speer, but is nonetheless an interesting miniseries with well-developed characters which stimulates interest in the events.

The plot spaces from the capture of the main Nazi war criminals to the end of the trial, as the historical accuracy varies from one point to the next.