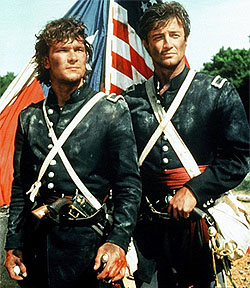 North and South is shorthand for a trilogy of books written by John Jakes: North and South, set during the antebellum period of American history, Love and War, which takes place during the Civil War, and Heaven and Hell, which covers Reconstruction and the period of western expansion that followed.
Advertisement:

The focal point of the saga is a budding bromance between Orry Main of South Carolina and George Hazard of Pennsylvania. The two become best friends while attending West Point, then fight side-by-side in the Mexican-American War, but later find themselves and their families on opposite sides of the war. The slave-owning Mains are rural gentleman planters while the big-city Hazards are heavy in industry, their differences reflecting the social divisions that eventually led to the Civil War. Basically, it's a soap — but with a budget.

The three series, all of which aired on ABC, clocked in at at combined 1212 minutes. In addition to being a breakout role for Swayze, a number of then-unknown actors (Forest Whitaker and Jonathan Frakes, to name two) also saw their careers get a boost.

Not to be confused with the Elizabeth Gaskell novel and miniseries of the same name.

Alternative Title(s): North And South US