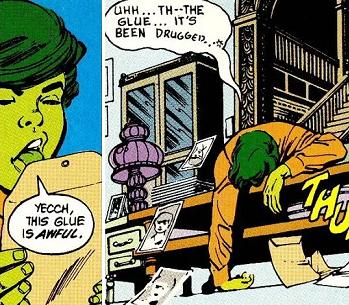 Poisons in detective novels are one of the great romances in fiction. Writers of the genre are always looking for new ways to administer the deadly stuff, which gives us this trope: a murder method wherein poison is unwittingly self-administered when the victim licks an object coated in the poison.

The object could be anything, although the more innocuous, the better. One popular method is to coat the pages of a book in poison, so that when the victim licks their finger to turn the page, the poison is passed to them. This is somewhat dated, since people don't lick their literature much anymore, but it may be Justified by saying the pages were stuck together or from an old, delicate book.

Other seemingly innocent lickable objects, such as stamps or envelopes, are also popular.

Most often a mystery trope, considering the murder angle. Modern examples of are probably inspired by the novel/film The Name of the Rose, although one early example is from the Arabian Nights.

Related to, but separate from, Poisoned Weapons and Drugged Lipstick. The murderer may use a Perfect Poison to do the job. Not to be confused with a Fingertip Drug Analysis, though less-subtle examples may rely on the victim trying one.