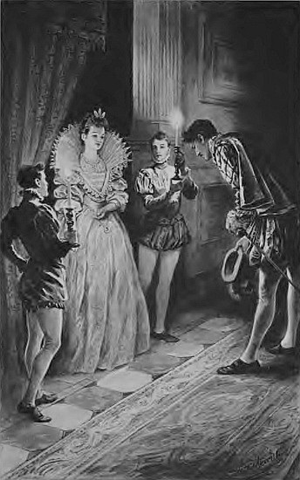 A Queen, a King, and her cabinet.
Advertisement:

La Reine Margot (A.K.A "Queen Margot", "Marguerite de Valois") is the first novel of The Last Valois series written in 1845 by Alexandre Dumas, père. The series next books are La Dame de Monsoreau and Les Quarante-Cinq.

During the reign of Charles IX and the French Wars of Religion, the throne of France had several suitors and every one try their hardest to keep it. Marguerite de Valois, better known as Margot, marries Henry de Navarre to bring peace to this chaotic country. Margot, who does not love Henri, begins a passionate affair with La Môle, a noble Huguenot, who was saved by her during the St. Bartholomew's Day Massacre.

Beside the famous Huguenot decimation, the plot contains murders by poisoning, court intrigues and several attempts of murder.

It has been adapted to a movie in 1994 with Isabelle Adjani, Daniel Auteuil, Virna Lisi and Vincent Perez.