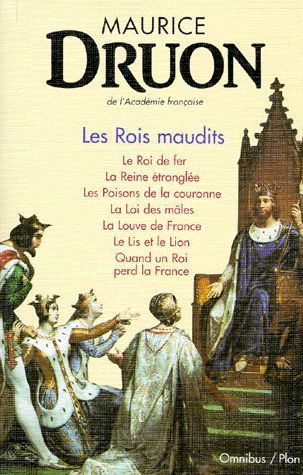 "The Accursed Kings has it all: iron kings and strangled queens, battles and betrayals, lies and lust, deception, family rivalries, the curse of the Templars, babies switched at birth, she-wolves, sin and swords, the doom of a great dynasty and all of it (or most of it) straight from the pages of history. And believe me, the Starks and the Lannisters have nothing on the Capets and Plantagenets."
— George R. R. Martin Introduction for 2013 English Edition

The Accursed Kings (Les Rois Maudits in French), by Maurice Druon, is a series of seven historical novels that detail the destruction of the Knights Templar, then the subsequent deaths of Phillip the Fair and his sons, the ensuing Succession Crisis (or three) and the beginning of The Hundred Years War, set up against the backdrop of France spiraling down into a veritable Crapsack World after it gets hit by disaster after disaster. While the period is described (quite aptly) as France's Darkest Hour, there is a lot of Black Comedy and ham involved.

The story begins in 1314, during the reign of Philippe the Fair. He is an effective king, if not well-loved, and has three sons. But his sons are being cuckolded: two of his daughters-in-law are sleeping around, with the help of the third. Of course, the Iron King's greatest accomplishment has been dismantling the Knights Templar, a task which took most of his reign up until now... but as the order's last Grand Master, Jacques de Molay, is burnt at the stake, he shouts out that the Kings of France shall be cursed unto the thirteenth generation.

Creepily, the next Kings of France had notably horrible reigns. Particularly, Philippe had three surviving sons, but all of them inherited the throne, and the sole issue any of them had sired by this point had her legitimacy thrown into question by the whole daughters-in-law-sleeping-around thing. Those accursed kings form the primary focus of the novel.

The B-plot concerns Robert D'Artois and his attempts to (re)gain his father's county, which his aunt has cheated him of. Since that aunt is the mother of two of the daughters-in-law, he gets drawn into the main plot to the point where it can hardly even be called secondary.

The series has been adapted for television twice, in 1972 and in 2005, both only covering the first six books.

George R. R. Martin is a big fan of this saga, and drew some of his inspirations for A Song of Ice and Fire from it. He even pushed for a new translation and publication in English, calling it The original Game of Thrones, no less!