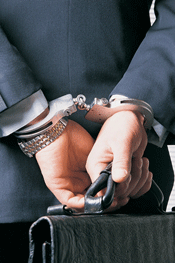 Wage theft. Fraud. Bribery. Ponzi schemes. Insider trading. Labor racketeering. Embezzlement. Cybercrime. Copyright infringement. Money laundering. Identity theft. Forgery. Cooking the books. According with That Other Wiki, these are all white-collar crimes, the sort executed by the white-collar worker. They tend to be non-violent and money-driven. The Enron scandal in Real Life raised awareness about these sort of criminals. If the perpetrators are caught, fiction will often portray them as going to a Luxury Prison Suite. How often this happens in Real Life (and to what degree) varies.

The supertrope of Stealing from the Till, Penny Shaving, Fake Charity, 419 Scam, and Ponzi. If a religious organization is used as a means to scam people out of money, see Path of Inspiration. Compare the Corrupt Corporate Executive, who will often be involved in this. It's important to note that this type of crime could be considered the evolution of organized crime and The Mafia in general, since in times where there is more police technology and violence draws too much attention, the vast majority of the most professional criminal organizations have opted for semi-legitimate, less violent systems.