"Now, are ya gonna buy somethin' or just stand there? Cause there's a standin' fee." 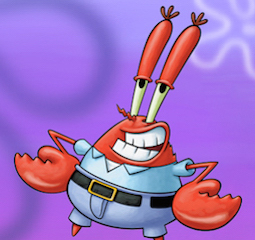 The owner of the Krusty Krab and SpongeBob and Squidward's boss, who lives in an anchor with his teenage daughter Pearl. He talks like a pirate, loves sailing, and has an obsession with money. His over-the-top greed and cheapness is played for laughs.