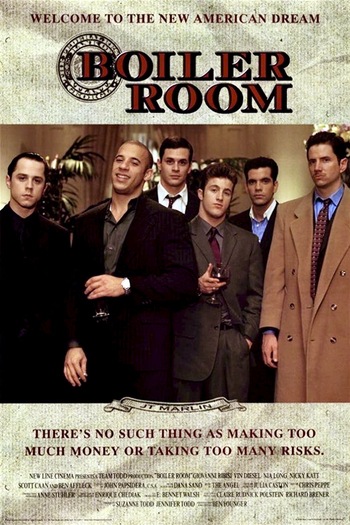 The film takes a look at the world of "boiler room" (seedy, dishonorable, and often fraudulent) brokerage firms. The film centers on college dropout Seth Davis (Ribisi), a budding underground casino owner from Queens, New York, who gets a job at J.T. Marlin, a less-than-reputable brokerage firm. However at the time, Seth is totally unaware of the firm's criminal reputation. Davis' opposition to his disapproving father, a federal judge, drives the plot as he goes deeper into the operation at J.T. Marlin than he'd like, learning how the firm scams its clients. The company is a chop shop brokerage firm that runs a "pump and dump", using its brokers to create artificial demand in the stock of defunct companies by cold calling unsuspecting investors and selling them shares at prices set by the brokerage firm, which include a large commission to the brokers (up to three dollars a share for a penny stock). When the firm is done pumping the stock, the investors then have no one to sell their shares to in the market, and the price of the stock plummets.

This film was inspired by the real-life experience of Ben Younger, who had gone to a meeting with a friend at an actual boiler room. The friend, who drove a new sports car, claimed "...you work here for a year, make your million bucks, go to the Bahamas..." and suggested that Younger work there. The firm (which was busted a few years later) offered Younger a job, which he declined -choosing instead to write about it.

The DVD release includes an alternate ending that implies a workplace massacre by one of the cheated clients.