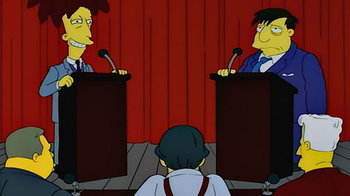 With help from the Rush Limbaugh-esque Birch Barlow (a conservative talk radio personality), Sideshow Bob gets released from prison again and runs for mayor against "Diamond" Joe Quimby — and Bart and Lisa investigate how one criminal running for public office got so many votes while another criminal got so few.

Example of:
Attack of the Political Ad