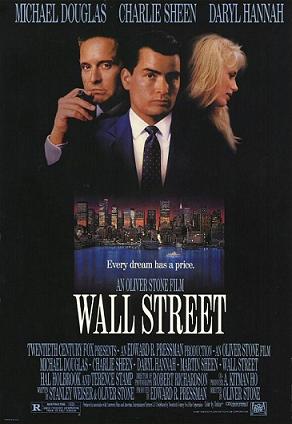 "The point is, ladies and gentlemen, that greed — for lack of a better word — is good."
— Gordon Gekko

Wall Street is a 1987 movie directed by Oliver Stone and starring Michael Douglas (in an Oscar-winning performance) and Charlie Sheen.

A stockbroker named Bud Fox (Sheen) wants to become top of the world. He becomes involved with his idol, Gordon Gekko (Douglas), a ruthless Wall Street player who has a conflict with Bud's father, Carl (Martin Sheen).

It received a sequel in 2010, Wall Street: Money Never Sleeps.

Not to be confused with the actual Wall Street. ...there is no such article on that here yet.

"Tropes, for lack of a better word, are good. Tropes work."