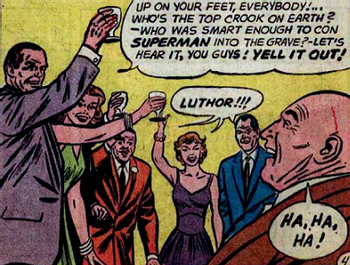 "You compare this insignificant nothing to Zarbon and Dodoria? Was that a joke? Ha! Either you brought the most cowardly of all my troops to my welcoming party, or the Frieza Force has become woefully faint of heart. How do you expect us to run an empire that strikes fear across the galaxies while we're cowering from a handful of Saiyan garbage?!"
—Frieza, Dragon Ball Z: Resurrection ‘F’
Advertisement:

Whether you consider it short for villain credentials or villain credibility, it's a measure both of how much respect a villain gets among his fellow rogues and of how credible a threat the do-gooders and the authorities consider said villain to be. It's earned through successful completion of bold, daring and devious deeds; in other words, nothing so pedestrian as robbing bank or holding up a liquor store will suffice. It can also be lost in a heartbeat if one runs afoul of meddling kids and their talking dog.

A specific villainous version of a Karma Meter. Often a major motivation factor for a Card-Carrying Villain or Noble Demon.

A supertrope to Arson, Murder, and Admiration, a more comedic take on the concept. Compare Fame Through Infamy. Contrast Unintentionally Notorious Crime, where a villain gets too much cred. Do not confuse with Villain Respect, which is directed at heroes.