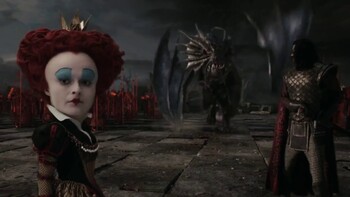 Meet the real power behind the throne...
Advertisement:

When the villain's pet is the key reason why he is a threat in the first place, you have a case of Villain Holds the Leash. Whilst the pet is only obeying its master's orders, its presence greatly increases the villain's threat level. Maybe the pet has some sort of ability that is crucial to the Evil Plan. Maybe the villain needs its presence to keep his human minions in line. Or maybe their master is simply a Non-Action Big Bad who needs the beast as muscle. In a nutshell, whilst the human villain is the one giving the commands, the pet is the main antagonistic force in the plot.

This can vary from an Evil Overlord with a dragon, a Mad Scientist with a genetically engineered monster, a Corrupt Corporate Executive Rich Bitch with a Mister Muffykins to a street gang with an Angry Guard Dog. The defining factor of a case of Villain Holds The Leash is that, without the pet, the master is much less of a threat. The pet is the main asset in the villains' operation - with its defeat, their powerbase decreases significantly and they are far easier to dispose of.

Exactly how the villain ended up holding the leash varies. Sometimes, the pet is loyal to the villain - often ferociously so - and serves them of their own free will. In other cases, the pet's loyalty has been forced, either through abusive treatment or through mind control by either magical or scientific means. If it's any of the latter two instances, expect the attack dog to turn on its master, either killing them or abandoning them to their fate once freed of their control.

See also Shark Pool (where the villains' pet is mostly sedentary), Action Pet, Kid with the Leash, Fluffy Tamer and especially The Beastmaster and/or Squishy Wizard, whom these kinds of villain usually tend to be.

Compare The Dog Was the Mastermind for works where the pet is the Big Bad, rather than its owner.