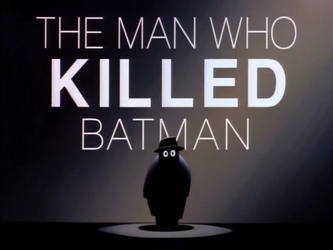 We open with a terrified man running through the rainy streets of Gotham, as if being chased by someone. An issue of the Gotham Times floats by reading "BATMAN SLAIN? Mysterious Crime Fighter Missing." The man, Sidney Debris, a small, bespectacled scaredy-cat, eventually arrives at Rupert Thorne's mansion and requests to see him. Thorne agrees and despite Sidney's nervousness, Thorne greets him warmly. We then see the reason for such warmth:
Thorne: I've heard you've made quite a name for yourself on the streets, Sidney. What is it they're calling you? Oh yes... "The Man Who Killed Batman."
Advertisement:

Sidney only stammers nervously at that statement, and halfway denies that it is true, before explaining that he is in big trouble. He then starts telling his story.

Some hours earlier, Sidney is just a nobody mob underling wanting to move up in the ranks. His "friend" Eddie G. informs him of a drug shipment they're picking up and Sidney asks to get in on it. Eddie lets the bumbling Sidney come in the hopes that he will serve as bait for Batman while the others get away. Eddie sweet-talks Sidney, claiming that this will get him a cool mob name like "Sid the Squid" (which Eddie gets from looking at a calamari billboard). Eddie then sends Sidney to the roof, ostensibly to keep watch. Predictably, Batman shows up at the roof and engages Sidney. Sid fumbles around, which casts a bunch of shadows that make it look like he is actually fighting Batman to the onlookers below. Eventually Sid accidentally falls off the roof and Batman pulls him up... but ends up falling himself, right on top of a leaking propane tank that explodes, leaving Sid holding on to Batman's cape and cowl. The rest of the mobsters arrive and notice the burning tank, Sid clutching the cowl and babbling incoherently. Believing that No One Could Survive That!, they conclude that "Sid the Squid just offed the Batman."

Sid, who all his life dreamed of being a "big shot," has apparently had his dream come true, and is being cheered by his fellow criminals in a bar celebration, with Batman's cape and cowl hanging by his chair. Unfortunately, the joy is short-lived, since the minute someone calls him "the toughest guy in Gotham," some muscled thug comes along wanting to take out Sid in order to take that "title." A fight breaks out, followed by the cops showing up and arresting everyone present, including Sid. While locking up the prisoners, Montoya gets the news from Bullock that Batman was killed by "some mastermind called 'the Squid'." Bullock starts demanding the prisoners give info on this "Squid," zeroing in on a terrified Sid until a woman enters claiming to be Sid's attorney... Harleen Quinzel. Sid's bail has been paid and Harleen is requesting he be released. Bullock asks Quinzel if they've met before, but she simply retorts with, "I served you a subpoena once. It was a small subpoena."

As Harleen and Sidney are being driven around, Sid wonders who could've bailed him out (and who would want to) in the first place — Sid and his mother don't talk to each other anymore and Sid's parole officer is still in jail, so neither of them could've been the one to have put up bail. After Said complains about Harleen's makeup choking up the air, she turns around, revealing a familiar hat and black and white face paint...

Harley: My boss likes me to wear a smile to work!
Sidney: Hey, I've seen you! You work for... Gasp! The Joker!

At the Clown Prince of Crime's hideout, the man himself welcomes Sid and requests to shake the hand of "the man who did the impossible: The Man Who Killed Batman" (though he's visibly disgusted at uttering the latter). Sidney notices a tack on said hand, which Mr. J excuses as "force of habit." Anyway, Joker's a smart guy and the fact that no body was found is bothering him, therefore they're pulling a job tonight to make sure Bats is really dead. Joker, Harley, their goons, and Sid then leave to rob the Gotham Diamond Exchange. "And if Batman hasn't really gone to his final reward, we'll see that he gets there!" quips Joker.

While the cops amass outside the Exchange, Batman fails to show. Joker swings between nervousness, anger at Sid, and finally sadness, over the fact that Batman is apparently really gone. He orders that Harley put back all the loot and utters the immortal line:

Joker: Without Batman, crime has no punchline.

After escaping the police via a laughing gas bomb, Joker and the gang hold a little "memorial" for Batman at the Ace Chemical Plant. Batman's cape and cowl is placed inside a coffin on a conveyor belt to a vat of acid, to which Joker adds a "Kick Me" sign ("You put The "Fun" in "Funeral"," says Harley). The Clown Prince of Crime proceeds to give his eulogynote and Mark Hamill shows what we all knew: he is utterly nuts!:

Joker: Dear friends... Today is the day that the Clown cried. And he cries not for the passing of one man, but for the death of a dream. The dream that he would someday taste the ultimate victory over his hated enemy. For it was the Batman who made me the happy soul I am today. How I agonized over the perfect way to thank him for that. Perhaps with a cyanide pie in the face. Or an exploding whoopie-cushion playfully planted in the Batmobile. [with growing anger] But those dreams were dashed by the weaselly little gunsel sitting there in our midst. [everyone starts moving away from Sid] The cowardly insignificant gonif who probably got lucky when Batman slipped on the slime trail this loser left behind him. This mound of diseased hyena filth who's not fit to lick the dirt from my spats! ... [regains composure] But I digress. The time for sorrow has passed. It's time to look ahead, to a future filled with smiles. [threateningly] And I'll be smiling again, just as soon as we take that man THERE... [points to Sid] ...and slap him in that box THERE... [points to Batman's coffin] ...and roll it into that vat of acid THERE! [points to said vat of acid]

Joker's goons then proceed to do exactly what the Joker suggested in his eulogy. They lock Sid, who repeatedly and desperately screams that he is sorry for what he did, in the coffin and it's rolled into the vat of acid... as Harley plays "Amazing Grace" on the kazoo. A tearful Joker watches as the coffin slowly sinks into the acid...

As the acid starts dissolving the coffin, things look grim for Sid until suddenly the lid opens and he finds himself on the Gotham River bank, which he attributes to the coffin being sucked down a drainpipe. He decides he needs to get out of town, so he calls Eddie to set him up with the leader of the drug ring...

...who happens to be Thorne, which brings us back to the "present" and the end of Sidney's story. Unfortunately, Thorne drops the friendly tone he's had thus far and suddenly becomes hostile: he doesn't believe that Sid managed to kill Batman and make a fool of the Joker by complete accident, since "no one is that lucky or stupid!" He accuses Sidney of "playing dumb" to muscle in on his drug racket, and draws a gun on Sid, offering to get him out of Gotham... "in a pine box!" Suddenly gunshots and fighting sounds are heard from the next room, which can mean only one thing...

Batman makes his dramatic entrance and quickly knocks Thorne out. Sid asks how Batman survived and he explains that he swung away before the explosion, and decided to tail Sid and lay low to find out who was heading the drug ring. Batman also saved Sidney from the acid. Sidney thanks Batman and tries to leave — but Batman stops him, pointing out that Sid is still an accomplice to Thorne's gang. Sid understands this, but Batman also adds that "in the right environment," a man of Sid's "dangerous reputation" can get "a lot of respect"...

...which finally brings us to Stonegate Penitentiary, where the rest of the inmates hail Sid as the man who almost killed Batman and, in the process, managed to not only make a fool of the Joker but also set up Rupert Thorne. A beaming Sid remarks, "A big shot at last!"

The Joker, who has always been obsessed with killing the Batman personally, does not take it well that a nobody did it before he could. After lamenting his pain at a impromptu funeral, he decides to take his revenge on him, by killing him in Batman's casket.

Example of:
The Only One Allowed to Defeat You

The Joker, who has always been obsessed with killing the Batman personally, does not take it well that a nobody did it before he could. After lamenting his pain at a impromptu funeral, he decides to take his revenge on him, by killing him in Batman's casket.