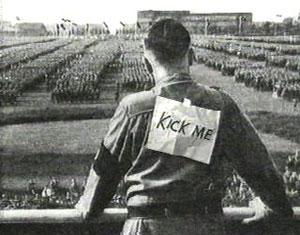 Right in Der Führer's butt!note Though if it were "Trete mich", it'd be more hilarious.
Advertisement:

The "Kick Me" prank is iconic; it's the go-to prank for unoriginal bullies. It's useful enough that a bully can use it to show he's a bully; he wants a victim kicked, so slaps them on the back (or if he wants to be subtle, compliments them on something while giving a "congratulating" pat on the back) and leaves them with the sign. Everyone gets to be in on the joke and the poor victim can't figure out why everyone's being so mean to him. This usually also demonstrates the Butt-Monkey status of the victim.

It can also be used to show that the erstwhile victim is clever; he knows that the bully is a bully and thus pulls the paper off his back, then gives a disgruntled remark about it.

It can be used to show that a bystander is heroic when he pulls the sign off another's back, or that he's a Knight in Sour Armor by cracking wise as he does so.

The prank comes in infinite variety. The prank requested need not be a kick; it could be a slap, a poke, or a tickle. It could be a message like, "Laugh, but don't tell me about it" or more common nowadays is an insulting/humiliating message. Sometimes it's not even a bad thing; it could be a request for a hug.