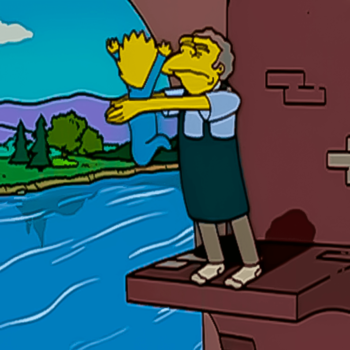 Nothing convinces one not to commit suicide better than accidentally saving a baby while trying to.
TV: HIGH SCHOOLER FOILS BANK ROBBERY WITH NOTHING BUT BOW AND ARROW!
Yakumo: Wow, that's impressive.
Tenma: That's not what was supposed to happen at all!
— School Rumble
Advertisement:

In either flavor, public acclaim that just won't go away is the main complication. The subsequent plot is a good showcase for examining the fiber of the accidental hero's character and to spin a little yarn about how people ''need'' heroes. Many times he becomes a true hero by the end of the story.

When someone purposely tries to look like the hero without deserving it, there may be overlap with Engineered Heroics.

May be a consequence of Non-Protagonist Resolver. Compare And You Thought It Was a Game, Badass on Paper, Cowardly Lion, Framed for Heroism, God Guise, Nominal Hero, Mistaken for Badass, Spanner in the Works, Nice Job Fixing It, Villain. May result in Broken Pedestal.

This trope is the spiritual opposite of Nice Job Breaking It, Hero. Contrast Unwitting Instigator of Doom.

DK "saves" Bluster randomly turning off the Barrelworks machinery before it kills him, without realizing it.

DK "saves" Bluster randomly turning off the Barrelworks machinery before it kills him, without realizing it.