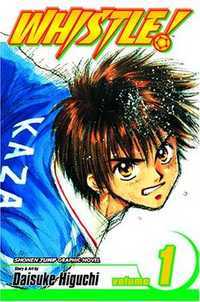 Whistle! is a Shonen Jump soccer manga by Daisuke Higuchi, about a soccer-mad Determinator, Sho Kazamatsuri, who, due to his short height, was left on the sidelines by his old school's soccer team, Musashi no Mori school. Unable to play the soccer he loves so much, Sho tranfers to Sakura Josui Junior High School, and from there, begins to hone his skills and realize his dream of becoming a professional soccer player.

Along the way, he meets many friends and rivals, among them, teammates soccer genius Tatsuya Mizuno, Kansai boy Shigeki Sato, science geek Daichi Fuwa, and the Musashi no Mori players themselves, as they struggle together to improve their soccer skills, overcome their weaknesses, and find unity in their teamwork to be the best they can.

Well-written and well-drawn, Whistle! was written as a tribute to the 1998 FIFA World Cup in France and the 2002 FIFA World Cup in South Korea/Japan. The manga was serialized in Weekly Shonen Jump from 1998 to 2002, and it was adapted into a 39-episode anime series that ran from 2002 to 2003.