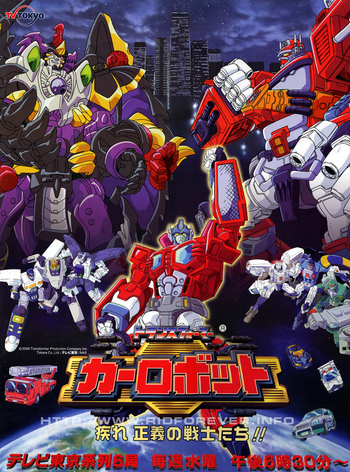 Robots in Disguise was the first dubbed Transformers show ever broadcast for a US audience. (English dubs of Japan-exclusive G1 cartoons like The Headmasters were produced in Asia for markets like Malaysia, but those dubs never aired in the US because they were really, really bad.)

Transformers: Car Robots, the original Japanese series from which it was adapted, premiered in Japan in 2000. Originally the series was not going to be imported from Japan, but when Hasbro scrapped the planned Transtech line at the eleventh hour the Car Robots line and its attendant cartoon were imported to fill the void until a new replacement could be designed.

Robots in Disguise was produced and dubbed by Saban Entertainment, and aired from September 2001 to March 2002 on Fox Kids (which had also aired Beast Machines and reruns of Beast Wars prior to this). It was something of a return to roots for Transformers fiction, in the sense that many characters transformed into realistic, modern Earth vehicles instead of animals or abstract/futuristic vehicles, as was standard in the Beast Era. It also marked the return of the Autobot faction and sigil for the good guys. The villains were initially called Predacons as they were in Beast Wars, but the Decepticons were added later as a sub-group. The show makes a contrast between the bumbling antics of the Predacons and the professional, sinister Decepticons.

Most of the voice actors were veterans of other Saban properties (basically, everyone from Digimon) but had never worked on a Transformers series before. Michael McConnohie, one of the series' voice directors and the voice of Hot Shot, had voiced Cosmos and Tracks in the original cartoon.

All 39 episodes were scheduled to run during the afternoon Fox Kids programming block. The third episode, "Bullet Train to the Rescue", was scheduled to air on September 11, 2001, but was not aired in most areas because of the terrorist attacks in America that day. Later episodes were edited to remove scenes that were considered similar to the events of that day, such as buildings being blown up.

For its all its action-packed adventures, there was an equal amount of emphasis on gags and humor. For all its emphasis on stand-out characterization, the plot could at times be equally as kiddy (Omega Prime powering his Matrix Blade with the happiness of children). However, attempts to compare Robots in Disguise to Beast Wars or Beast Machines may prove fruitless in the long run as the show was made in Japan for young children. But all in all, Robots in Disguise was ultimately meant to be a transitional/filler series from the end of Beast Machines to the start of Armada and it did its job quite well.

Disney is now believednote Presuming the license hasn't expired to own the cartoon through their acquisition of Saban. DVDs for this show are only available in the UK, much to the annoyance of US fans. The Japanese continuity received some form of follow-ups as toy packed-in comics to promote the Transformers Legends toyline.

Not to be confused with the American-produced Transformers: Robots in Disguise (2015) cartoon.