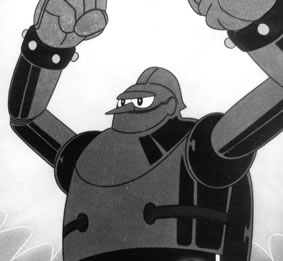 Bigger than big! Taller than tall! Quicker than quick! Stronger than strong! Ready to fight for right! Against wrong!
Over the buildings he soars
Over the highways he roars
DA-DA-DA-DA-DA
The flying bullets go
BA-BA-BA-BA-BA
And everything explodes
ZOOM
Goes the flying Tetsujin
Number 28, go!
—Rough translation of the Japanese version's Bragging Theme Tune.
Advertisement:

Gigantor — Tetsujin Nijuhachi-go, or "Iron Man #28" in the original Japanese — is a Humongous Mecha controlled by a young boy, Jimmy Sparks (Shotaro Kaneda). They live on a remote island with Jimmy's uncle, a scientist, and fight crime. Originally set just after World War II, the English dub portrayed the show as being set in the then future year of 2000. Based on the original manga by Mitsuteru Yokoyama, it is one of the first popular anime to air in America, both the original form, produced by Eiken Studios (formerly called TCJ), and in the revamped New Adventures of Gigantor originally produced in 1980 by TMS Entertainment, and aired internationally in the late '80s / early '90s. The sequel, Tetsujin 28 FX was produced by the same production that created New Gigantor and was aired in 1990's in Japan. It was also remade in 2004 and given a live-action adaptation in 2005. Recently, Tetsujin-28 Gao was produced by the same company that created and animated the first Gigantor series and was aired by 2013.

Tetsujin-28 also has the distinction of being the first Humongous Mecha anime in history, predating Mazinger Z by a solid 10 years, making it the grandpappy of all the mecha series you see today.

In late 2009, the city of Kobe in Japan completed a statue of the robot. It is full size, 60 feet tall and weighing in at more than 50 tons. Just looking at it

shows how impressive a real-life Humongous Mecha would be.

On a more unsavory note, protagonist Shotaro Kaneda is the Trope Namer of "shotacon" in Lolicon and Shotacon ("shotacon" stands for Shotaro Complex), together with the other term "lolicon" (or, Lolita Complex).