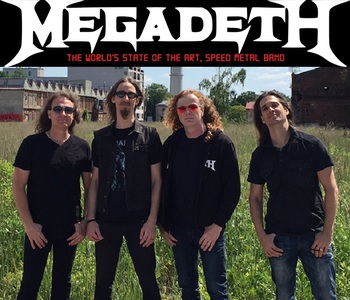 What do you mean I can’t describe Megadeth here?

One of the "Big Four" Thrash Metal bands, Megadeth was formed in 1983 by guitarist Dave Mustaine after he was kicked out of Metallica for drinking and violent behaviour. After two years of lineup instability, the band settled down and were signed to Combat Records, where they released their debut album Killing Is My Business... and Business Is Good!. Despite poor production and a thrash metal cover of a Nancy Sinatra song that later got them in legal trouble, the album was well received.

When the time came to record their second album, Mustaine got fed up with the small label's shortcomings and signed the band with Capitol Records instead. Their second album, Peace Sells... But Who's Buying? was released in 1986, again receiving critical acclaim and commercial success. However, the tour became plagued by substance abuse problems, which spilled over during the recording of So Far, So Good... So What!. Released in 1988, the album reached number 30 on the Billboard 200 despite having no commercial radio play.

After some time off in rehab for the band and another line-up change, Megadeth returned with Rust in Peace in 1990, a progressive effort which contained the famous songs "Holy Wars... The Punishment Due" and "Hangar 18." They remained silent for two years, after which they pulled a Follow the Leader and released Countdown to Extinction, an album full of slower, less thrashy, straightforward heavy metal songs modeled after Metallica. It was their greatest commercial success, reaching #2 on the US charts and selling in excess of 2 million copies, propelled by the singles "Symphony of Destruction," "Foreclosure of a Dream," and "Sweating Bullets." The simplification continued on 1994's Youthanasia, attracting some condemnation from older fans but overall being received just as well as its predecessor, going to #4 on the charts and spawning the hits "Train of Consequences" and "A Tout le Monde," with MTV banning the latter's video for supposedly being "pro-suicide."

Troubles started in 1995 after Megadeth changed their management, hiring Bud Prager. His influence would ultimately prove counterproductive, as he steered the band towards more blatantly commercial tracks, convinced them to work with Nashville pop producer Dann Huff, and closely supervised the writing process, also contributing musical ideas and lyrics to the songs. Cryptic Writings was released in 1997, to a mixed critical reception and less sales than Youthanasia, despite four Mainstream Rock hits. Mustaine then made the critical mistake of giving more influence to Prager and Huff, which resulted in Risk. Largely eschewing metal in favour of newfound dance and electronic influences, it was a failure that triggered a backlash among fans and critics.

After the debacle, Megadeth left Capitol Records for Sanctuary Records. Mustaine fired Bud Prager and decided to self-produce their next album, which would be a return to metal. The World Needs a Hero did mark a return to form, but had a mixed reception critically and commercially.

In 2002, Dave Mustaine suffered an outbreak of radial neuropathy in his left arm, and temporarily disbanded Megadeth. After physical therapy and occupying himself with remastering the band's catalogue, he gathered a new lineup (the first to include Chris Poland since 1988), and released The System Has Failed in 2004, to critical acclaim. Since, they've released United Abominations on Roadrunner Records in 2007, and Endgame in 2009, both to further acclaim from fans and critics (especially Endgame). Megadeth's last album on that label, simply titled Th1rt3en, was released in 2011. After that Dave Mustaine started his own record label, Tradecraft, in 2013; Super Collider was released that same year. The band saw some turmoil near the end of 2014 due to the departure of long time members Shawn Drover and Chris Broderick, but the band soldiered on. Dystopia, which saw the band include Chris Adler of Lamb of God and Kiko Loureiro of Angra among their ranks, was released in January 2016.

In May 2021, after a nearly forty year-long on-and-off membership in Megadeth, David Ellefson was abruptly fired following a massive scandal where numerous sexual clips involving him and a girl several decades younger than him were leaked across the internet. The resulting online controversy ultimately resulted in all Megadeth-affiliated social media accounts unfollowing him, before an official announcement from Dave Mustaine, citing both this incident as well as strained personal relations, officially severing their ties to Ellefson on May 24, 2021. Former bassist James LoMenzo will finish the current tour, and it is to be announced who is Ellefson's proper replacement, who Mustaine stated has already recorded over Ellefson's bass tracks in the band's 2022 album The Sick, the Dying... and the Dead!.

The band are famous for their musical skills, extended songs, and sociopolitical sensibilities expressed in the lyrics, especially during their "classic" period (1985-1994). While not to the extent of Anthrax, their lyrics tend to be more humorous (in a sarcastic / tongue in cheek manner) than those of Metallica and Slayer. Despite the late-career follies that have also plagued Metallica (sans Digital Piracy Is Evil), their place in the thrash metal pantheon is assured, arguably more so after their second wind in 2004.

"Tropes sell, but who's buying?"