Music / Megan Jean and the KFB 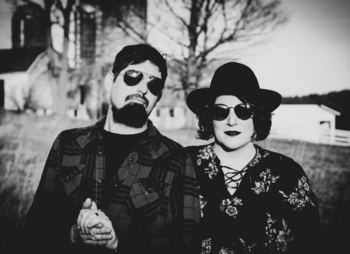 Byrne Klay and Megan Jean
"These bones, these bones
Are far from home
Mister, can you tell me
The reason why I roam?"
—"These Bones", The Devil Herself
Advertisement:

Megan Jean and the KFB are an alternative folk duo from Charlston, South Carolina (USA), consisting of classically trained vocalist/percussionist Megan Jean and her husband Byrne Klay, who plays guitar and miscellaneous additional instruments. They formed in 2004.

Their sound is an eclectic mix of Appalachian folk and gothic country, reliant on Jean's theatrical, broad-ranged vocals and intricate lyrics, which tend to highlight the dark and macabre.

Tropes applying to MJKFB and their work: