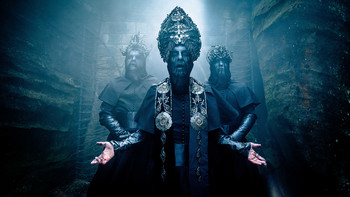 Pictured: Nergal, Orion, Inferno. Not pictured: Seth.
Behemoth is a Blackened Death Metal band from Poland, and one of the largest extreme metal bands in their country. Formed in 1991, they started as a straight black metal band, but changed their sound over time to include more and more death metal elements, while keeping the visual style and general themes of a black metal band. This came to a head with Satanica, where their style coalesced for the first time. Their first real big hit record was Demigod, which established several of their better known songs including a couple of their Signature Songs. This set the tone for their following two albums, where they slowly grew in prominence in the Blackened Death scene. Unfortunately, things seemed to be looking pretty grim in 2010 hot off the heels of the release of Evangelion: Vocalist and guitarist Nergal was diagnosed with leukemia, and it seemed as if all was lost... but thankfully, he managed to survive it thanks to a fan's donated bone marrow matching. Two years of intensive recovery later, and a year in the studio, Behemoth released The Satanist, which was yet another shift in their work towards adding progressive elements into their blackened death metal, and that only increased with their most recent release: I Loved You At Your Darkest.

This is not the page for a big-ass monster.