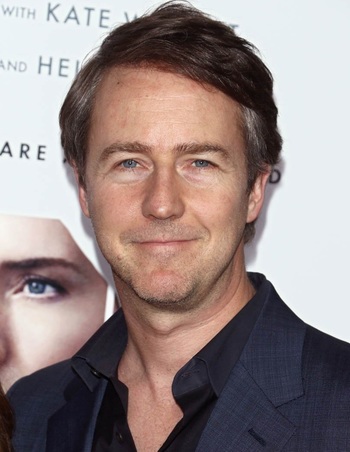 "I always felt that acting was an escape, like having the secret key to every door and permission to go into any realm and soak it up. I enjoy that free pass."
Advertisement:

Edward Harrison Norton (born August 18, 1969 in Boston, Massachusetts) is an American film actor, screenwriter and director. In 1996, his supporting role in the courtroom drama Primal Fear garnered him a nomination for the Academy Award for Best Supporting Actor. A year later, his lead role as a reformed white power skinhead in American History X earned a nomination for Academy Award for Best Actor. His other films include period dramas such as Kingdom of Heaven, The Illusionist, and The Painted Veil; and other notable films such as Rounders, Fight Club, 25th Hour, Red Dragon, and The Incredible Hulk.

Aside from acting, Norton made his directorial debut in 2000 with the film Keeping the Faith. He followed up with an adaptation of the novel Motherless Brooklyn, which was finally released in 2019 after many years in Development Hell. He is a member of the board of trustees of Enterprise Community Partners, a non-profit organization for developing affordable housing, as well as a social activist.

Rather famous as a Doing It for the Art kind of actor and for occasionally trying to take over the production of some of his films. He parodied this part of his personality in his Oscar-nominated role in Birdman or (The Unexpected Virtue of Ignorance).

Also, he is fluent in Japanese and has a genius-level IQ.