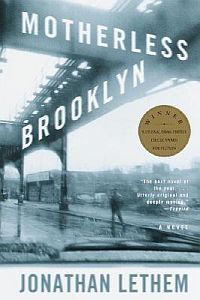 Motherless Brooklyn is a postmodern novel by Jonathan Lethem which tells the tale of Lionel Essrog, low level gangster/detective extraordinare, afflicted with Tourette's Syndrome. Essrog works for Brooklyn Gangster Frank Minna, as one of his "Minna Men", along with three boys he grew up with in a Brooklyn orphanage. When Frank is killed in a mysterious meeting gone wrong, Lionel takes it upon himself to solve the crime. Taking his cues from hardboiled detective films, Lionel finds himself making enemies of elderly mobsters and a zen Buddhist center. The mystery deepens when Lionel becomes involved with Minna's ex-wife as well as Buddist practitioner Kimmery, and learns more about his old boss and father figure than he ever thought possible.

It's a sweet, exciting, kind of sad story that won the 1999 National Book Critics Circle Award and the 2000 Gold Dagger award for Crime fiction. A loose film adaptation, reimagined with a 1950s setting and directed, written by and starring Edward Norton as Lionel, spent 20 years going through Development Hell, but was eventually made and released on November 1st, 2019.