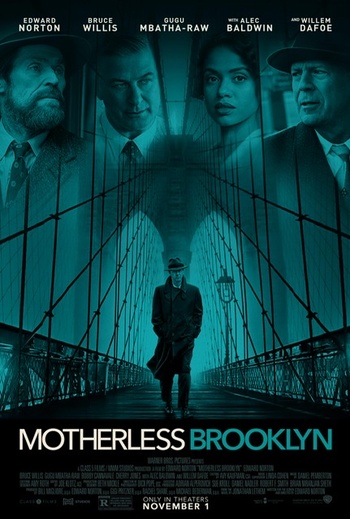 Motherless Brooklyn is a 2019 neo-noir drama directed by, written by, and starring Edward Norton alongside an All-Star Cast loosely based off the novel of the same name.

In 1950s New York City, Lionel "Brooklyn" Essrog (Norton) is a Private Detective suffering from Tourette's Syndrome working for his adoptive father Frank Minna's (Bruce Willis) detective agency and car service alongside his fellow orphans Gilbert Coney (Ethan Suplee), Tony Vermonte (Bobby Cannavale), and Danny Fantl (Dallas Roberts). After Frank is shot with his own gun after attempting to blackmail some shadowy people connected to a mysterious case he was working on, Lionel begins investigating the case, hoping to bring Frank's killers to justice, only to find a massive conspiracy that extends all the way to the top of the local government.