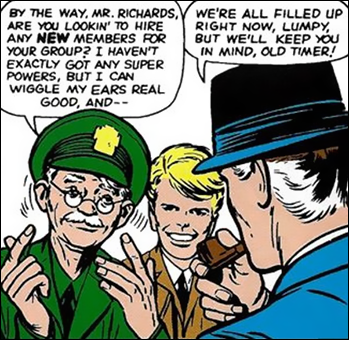 "Then I can hum a fugue of which I've heard the music's din afore,
And whistle all the airs from that infernal nonsense Pinafore.
Then I can write a washing bill in Babylonic cuneiform,
And tell you ev'ry detail of Caractacus's uniform."
— Major-General Stanley, The Pirates of Penzance, "Modern Major-General"
Advertisement:

This character is an expert in a skill that has no practical use for them. It may be a cool, weird, fun, or even astonishing skill, but it's essentially pointless for them to have, or other characters are convinced the skill is totally useless.

Tropes Are Flexible, so this skill might turn out to be useful in a rare or oddly specific situation, like a balancing-chopsticks-on-your-nose competition, and could even end up saving the day. This is not an Audience Reaction: playing an instrument, knowing a trade skill, or having some other useful ability is only this trope when it's treated as useless for the character In-Universe.

Sometimes, writers will establish a character having this skill early in the work and then use the apparently useless skill in an important way later on so that no detail is pointless. Other times, especially in a Long Runner, established characters suddenly reveal their useless skill as a means of Character Development or to reveal Hidden Depths. For Main Characters, this can help to develop their backstory or just show their quirkiness. It can also flesh out supporting characters without diverting too much of the narrative focus to them.

This kind of skill can also be used as part of a joke, especially if the other characters never asked about it. If the character is an expert in multiple useless skills, they might be doubling as the Plucky Comic Relief. And if this character is a superhero, whose powers are not themselves useless, then they may be a Super Zero.

Compare What Kind of Lame Power Is Heart, Anyway? when the useless skill is a Stock Superpower or supernatural ability. Compare and contrast Useless Superpowers, which aren't framed as useless but which the story prevents the character from using; and This Looks Like a Job for Aquaman, when otherwise useless powers become useful in a very specific situation.

This trope overlaps with Chekhov's Skill when a situation arises for a character to use a skill that was previously considered useless. See also A Degree in Useless when a character's post-secondary education is treated like this.