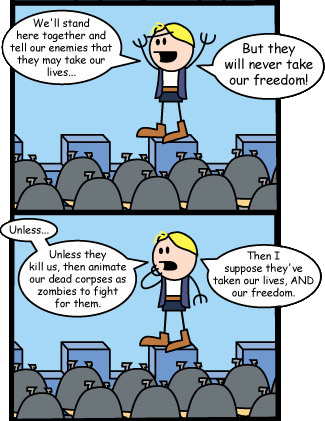 "You suck!"
"Go, ye heroes, go to glory—
Though ye die in combat gory,
Ye shall live in song and story!
Go to Immortality!
Go to death, and go to slaughter!
Die, and every Cornish daughter,
With her tears, your graves shall water!
Go, ye heroes, go and die!"
— Mabel Stanley and her sisters to cowardly policemen, The Pirates of Penzance
Advertisement:

When a Rousing Speech... isn't.

A hero — or, well, anyone — is about to go risk their neck for something. A sidekick or other people begin "motivating" them, sometimes in song, by thanking them for the dangerous task they are about to undertake, which may cause their deaths, describing To the Pain what the hero might suffer and — really, it would be better if the hero hadn't heard this speech at all. Especially in comedy shows.

The trope is named after a passage from the song "When the Foeman Bares His Steel," from Gilbert and Sullivan's The Pirates of Penzance.

Compare with Unwanted Assistance, where good intentions don't outweigh the negative effects of the "help". Contrast with the Rousing Speech, which "Go, Ye Heroes, Go And Die" subverts... unless the listeners are from a Martyrdom Culture where a call to go forth and die heroically is a Rousing Speech played straight. Also contrast Suicide Dare, where the speaker leaves out the heroic part and just says "Go and die."

Kermit attempts to get his fellow muppets onboard to help save Miss Piggy and catch the real thieves, but ends up scaring everyone away, when he mentions the possibility of danger.

Kermit attempts to get his fellow muppets onboard to help save Miss Piggy and catch the real thieves, but ends up scaring everyone away, when he mentions the possibility of danger.