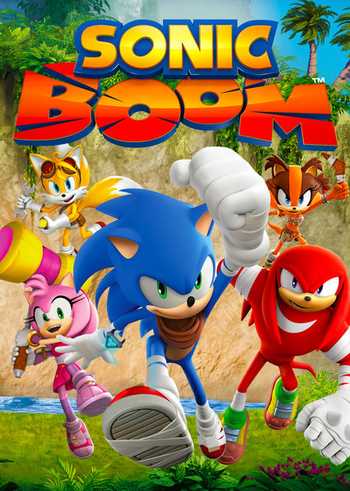 Clockwise from center: Sonic, Amy, Tails, Sticks, and Knuckles.
"Being a role model is overrated. I'd much rather be... hilariously edgy!"
— Sonic the Hedgehog, "Role Models"
Advertisement:

Protecting a mysterious and exotic island and the village that inhabits it isn't an easy job, but there's one super-speedy resident hero up to the challenge: Sonic the Hedgehog. Backing him up are his friends— young and intelligent inventor fox Miles "Tails" Prower, the brawny but not-too-bright Knuckles the Echidna, compassionate and strong-willed Amy Rose (who can occasionally be a little bossy), and jungle survivalist Sticks the Badger, whose somewhat... off-kilter way of thinking makes her the wild card. Together, Team Sonic is always willing to head into action to defend everyone's way of life from the evil scientist Dr. Eggman, their sometimes-friendly arch-nemesis who's bent on taking over the village as the start of his plans for world domination (but he's far from the only villain Team Sonic has to deal with). Though not every adventure of theirs involves battling evil, each one the team goes on is packed with action and hilarity. And one thing's for sure — Sonic and friends are always ready for whatever journey comes next.

Roger Craig Smith, Travis Willingham, Nika Futterman, and Mike Pollock reprise their in-game roles as Sonic, Knuckles, Sticks, and Dr. Eggman, while Tails is now voiced by Colleen Villard, and Amy appears for the first time in a Western Animation series within the Sonic franchise, also voiced by her in-game voice actress, Cindy Robinson. Production is handled by SEGA and directly supervised by Sonic Team's very own Takashi Iizuka.

The series debuted in the US on November 8th, 2014, and in the UK on June 1st, 2015. The first season was broadcasted on Cartoon Network in the US and France's Canal J and GULLI. The second season premiered on October 29th, 2016 in the US, after which, new episodes were broadcast on Boomerang, with Cartoon Network airing an encore the following week. The second season ended up being its last however as the series was cancelled after its run. note  Partly due to CN not advertising or giving it a proper timeslot, but likewise the Sonic Boom games failing as well.

Not to be confused with a Los Angeles fan event held as a Transatlantic Equivalent to the Summer of Sonic convention in the United Kingdom, or the North American main theme of Sonic CD, or any of the other numerous things related to the franchise with that name.

There are quite a few.

The Sonic Boom animated series is part of the spin-off franchise of the same name, a western branch of the main Sonic games, with the video games on Wii U and Nintendo 3DS serving as a prequel to the show. Initial impressions for the television series were fairly positive, a sharp contrast from the mixed-to-negative reception of the games, managing to keep the spin-off franchise afloat. Tropes for the games should be placed here.

Not surprisingly, it also had a short-lived comic book series from Archie Comics, a company that has had plenty of experience with Sonic. Tropes for the comics go here, currently in a rough state that could use more tropes.

Has a recap page in progress. Also has a Best Episode Crowner

Who knew a meathead can be so insightful on such a sensitive topic?

Example of:
Dumbass Has a Point

Who knew a meathead can be so insightful on such a sensitive topic?