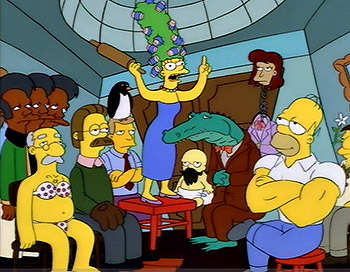 How Homer Simpson remembers the last town hall meeting.
"I used to be an Asian Boy Scout! Wasn't that a weird week?"
— Chester A. Bum, Up review
Advertisement:

This trope is when a character reminisces about something so outlandish and wild, it probably isn't true. Perhaps this character is out-and-out lying in an attempt to be interesting or shocking, or they might just be crazy enough to believe their crap. On occasion, if nobody else believes this person, it may actually prove to be true. In cases such as these they are quickly forgotten and never brought up again.

Typically, this trope is played up for comedic effect and will often occur in lonely old people. Adventurers are also prone to these as they like to brag about their past adventures. Also common amongst the Cloud Cuckoo Lander.

If multiple characters have one of these about the same event, it could lead to a "Rashomon"-Style story. If the event is frequently discussed, but never shown, it could be a Noodle Incident.

Alternative Title(s): Remember The Time When